1967-10-14 racegoers streamed out from Grandstand along Cemetery

According to 1967-10-15《South China Sunday Herald Post》:
The New Racing Season Was Ushered In At Happy Valley Yesterday With A BANG!
And a bang it was.
Racegoers were treated to a “fireworks” display when army demolition experts detonated a bomb which had been placed on the grass track near five-furlong post.
Racing was held up for nearly half an hour, and when it finally started it was not without its “moments”.
The resilience of punters is a world-wide phenomenon, as the opening day of the new season at Happy Valley yesterday once again demonstrated.
In spite of apprehension caused by the recent disturbances, the hopefuls flocked to the Valley in their thousands.
Police checked race-goers to minimize the threat of any trouble-makers causing an upset in the crowded public areas.
There were many who could not get inside, however, and some chose a wall round the course as their vantage point.
With evening and the last race run, the crowds streamed out of the course to wend their way home by car, bus, tram, rickshaw, bicycle…..or simply on foot.

According to a news-clip of 1967-10-15《Wah Kiu Yat Po》:
The First Day Of The Season, The Race Was Successfully Completed.
The Horse Racing In 1967-68 Started As Scheduled Yesterday.
Although it was plagued by bombs before the start of the race, the new season was opened after the munitions experts safely detonated a bomb.
It was scheduled to start at 2 pm.
About 1:40 pm, a suspicious object was found on the turf about 10 yards before the five-furlong post at Wong Nai Chung Road.
The stationed army ammunition experts and police officers immediately drove to the spot, and after inspection by the arms experts, it was confirmed to be a bomb.
The policeman then took the sandbags to the scene, covered on the bomb, and detonated it.
At 2:10 pm, with a loud sound of an explosion, the sandbags were blown up.

After the bomb was solved, the workers moved the sandbags to one side, and the horses went out to the starting gate.
The police had originally planned to open the large grass infield as usual.
However, after more than a hundred people entered, the bomb was found on the runway.

The police blocked the infield and later advised more than 100 people to leave.
The infield “grassroot overlords” was blocked from any activities.

According to another news-clip of 1967-10-15《Wah Kiu Yat Po》:
Horse Racing On The First Day Was Guarded Against From Land And Air
THE RACECOURSE WAS IN GOOD ORDER AND THE RACES WERE GOING SMOOTHLY
Before The Race, A Bomb Was Discovered And Immediately Detonated On The Turf In Front Of The Black Rock
Everyone Who Took Paper Bags And Parcels Was Checked And The Infield Was Cleared
A few minutes before the start of race one at 2 pm, a small accident occurred.

In the front of the Black Rock at Wong Nai Chung Road, a homemade bomb was thrown onto the track and squatted on the turf near the half-mile gate (Old Sports Road 975 meter start).
Actually, the Black Rock at Wong Nai Chung Road and the racecourse only fenced by a line of barbed wire. It was a snap throwing a bomb onto the runway.
However, it was immediately discovered and was safely detonated by the ammunition experts, after a sudden loud noise, then racegoers applauded.
Due to the impact of the incident, the race was delayed for fifteen minutes and subsequent races were postponed for half an hour of each.
At that time, the infield of the racecourse was originally opened, and many racegoers had entered being as “grassroot overlords”.
After the bombing incident, the police simply cleared the scene and urged all the people to leave.

As a result, the “grassroot overlords” were all implicated and everyone cursed the leftists.
However, racegoers were still allowed to watch the races in front of the Black Rock at Wong Nai Chung Road.
The police authorities stepped up their inside and outside of the racecourse yesterday, especially for attendants of the Public Stand.
The intention was to prevent illegal mobs from carrying explosives and the like into the racecourse.
Therefore, all persons with parcels or women carrying big handbags were inspected by the police.
The police hoped that in the future, racegoers attending to the racecourse should avoid bringing items such as hand-carries and parcels which might enough to cause suspicion.
Otherwise, the police’s inspection could be inevitable.
In addition to the special strengthening of the police inside and outside the racecourse, there were helicopters hovering around the racecourse all day, and watching any movements near the racecourse.
The main task of surveillance helicopters was to monitor whether there were mobs concentrated on disturbing the racecourse. 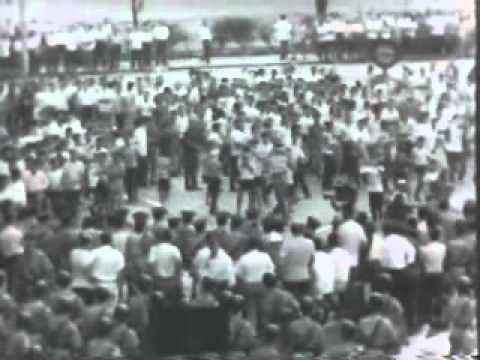 An unique athlete. One of the elite band of horses